Nantes − Saint Nazaire Port manages the navigation on the Loire Estuary, from the mouth of the Estuary as far as the Île de Nantes district of the City of Nantes. So as to ensure that the nautical accesses are properly maintained, dredging work is carried out on certain sections of the River Loire, including the shipping channel, the turning zones, and the quayside trenches that permit vessels to operate in changing tidal conditions.

Nantes − Saint Nazaire Port’s dredging policy is based on delivering optimal maintenance of channel depth according to expected traffic levels, while also limiting the impact of such operations on the estuarine environment. This strategy relies on making due allowance for the hydrology of the River Loire, since the River’s flow has a significant effect on inputs of sediments and the conditions for their removal. The tidal conditions also play a decisive role in terms of the re-suspension or the deposition of suspended matter present in the area of maximum turbidity, resulting in the sedimentary deposits on the bed of the Estuary.

In addition to the three hydrographical survey craft tasked with mapping the bed before and after each intervention, Nantes − Saint Nazaire Port employs three dredgers: the Samuel de Champlain, the first mobile suction dredger to be fitted with an LNG propulsion system, which is leased from the GIE Dragages Ports Port Dredging Group, the André Gendre, a stationary suction dredger, and the Milouin, which is equipped with a low-pressure water injection system.

The dredging operations are subject to authorization under the relevant water management regulations. Nantes − Saint Nazaire Port has notably been granted authorization to carry out maintenance dredging and disposal-at-sea operations, in the form of a Loire Atlantique and Vendée Inter-Prefectural Authority approval dated 24th April 2013, for a period of 10 years. That approval requires that regular environmental assessments be carried out in respect of the dredging and disposal operations (quality of the sediments, water quality, benthic fauna, macroalgae, marine habitats), and that an interim review be conducted after 5 years of operations. The assessments carried out also contribute to a better understanding of the Loire Estuary.

The average annual volume of dredged materials for the entire Loire Estuary is approximately 6.4 million m3. That volume is less than the average volume authorized under the Inter-Prefectural Authority approval granted in 2013 (8.5 million m3). The sediments present in the Loire Estuary are mainly muddy (in the proportion of 80 to 90 %), but the sand content is locally high in the Nantes channel. The proportion of sand has been tending to increase over the past few years, marking its return some 25 years after aggregates stopped being extracted from the bed of the River Loire upstream from Nantes. Because of the low level of chemical contamination in the sediments, it is considered that there is a low risk of pollution of the water and living habitat in the zones impacted by the resuspensions of sediments resulting from the dredging operations carried out by the André Gendre and by the Milouin, and from the disposals at sea by the Samuel de Champlain in the La Lambarde disposal zone. 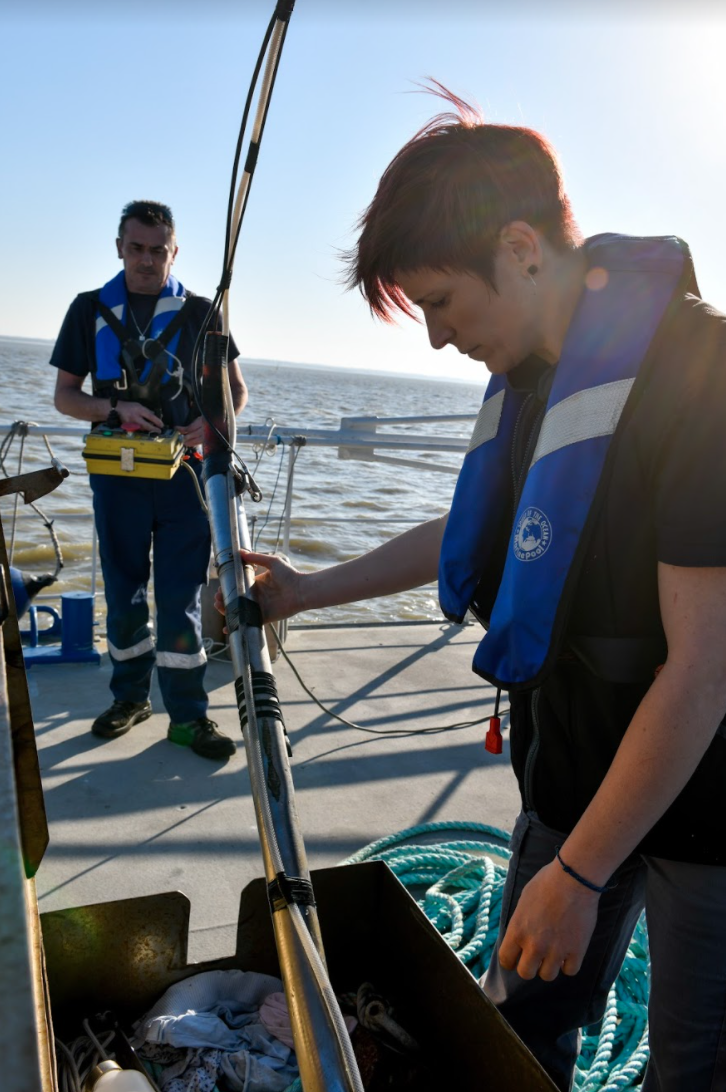