The Port of Nantes Saint-Nazaire is more than 3,000 years old... From ancient Corbilo to the 2020s, discover the founding stages and the many twists and turns that have shaped the Loire port world.

In the Iron Age, Nantes is a trading post inhabited by the Namnetes. It is also possible that Saint Nazaire is situated on the site of ancient Corbilo, described by Pytheas, a 4th Century B.C. Greek navigator.

Following the Gallic Wars, the Romans hand over the Southern Loire to the Pictons, the masters of the Poitou Region, encouraging them to found Portus Ratiatum, which will become Rezé. During the Gallo-Roman Period, Portus Namnetum (Nantes), an important Roman settlement, makes a living mainly from port activities, notably from the salt, copper and tin trades and from the sale of agricultural and marine produce. 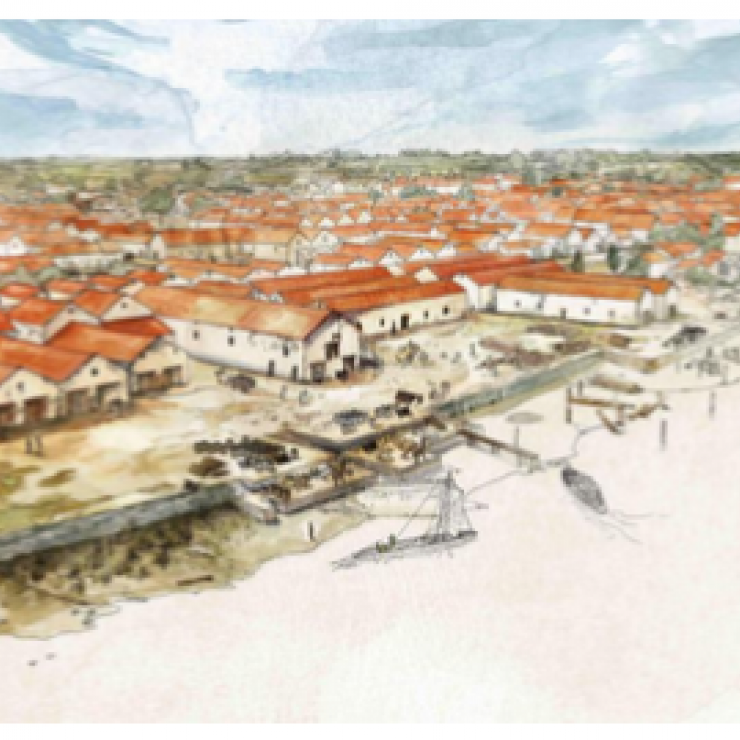 While extensive digging work is ordered on the marshlands east of the urban settlement of Nantes at the end of the 6th Century under the episcopate of Felix, it is necessary to wait until the 14th Century to see the Port opening up to international trade: boats laden with wine from the Loire Valley, with cloth, canvas and hemp, set sail for England and Ireland. Others return from Spain with cargoes of oil and metals.

In the 15th Century, Nantes is a port of call for the Hanseatic vessels which come to collect salt from the Bay of Bourgneuf. Trade agreements are signed with Castille and Leon, then with Bilbao. Fruit, alum, iron and wool arriving from Spain are found alongside the consignments of woollen cloth from Normandy, Flanders and Poitou and of cloth and canvas from Anjou and Germany that pass through Nantes.

Occupied since the Middle Ages, the area of La Fosse is developed in the early 16th Century, around the Place du Port-au-Vin marketplace. While Loire Estuary traffic - notably wine and salt - continues to dominate, the presence of Spanish, Dutch, Irish and Portuguese merchants establishes the Port of Nantes in its role as a European Atlantic gateway at the outlet of the River Loire.

At the beginning of the 17th Century, the merchants of Nantes continue to concentrate on inshore navigation but, in the face of competition from the wines of Bordeaux or the salt of Brouage, they are obliged to turn towards the waters of the Atlantic and go fishing for cod off Newfoundland. The first cargo of tobacco, brought back from the West Indies in 1639, opens the way for a new transatlantic trade. Vessels laden with raw materials set out for the Colonies and return with consignments of exotic produce. In 1665, the permission serves to organize the sales of the French East India Company develops trade with Senegal, China and India.

A new description of the episcopal see and seaport of Nantes, in Brittany - Credit : Jean Boisseau, 1645 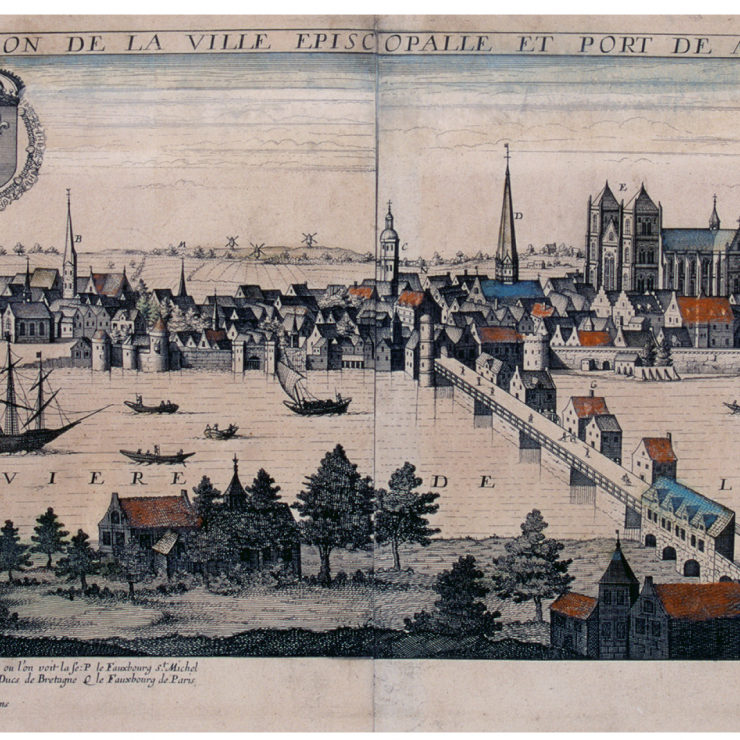 Considered to be the leading port in Europe in 1704, Nantes ranks first among French ports until the middle of the 18th Century. In 1725, the Irish, English, Portuguese, Spanish and above all the Dutch represent 13 % of the total number of merchants at the Port of Nantes.The East India Company having established its headquarters in Lorient in 1733, the slave trade becomes a considerable source of profit. Between 1707 and 1793, boats out of the Port of Nantes will represent 42 % of total French traffic. Once transported, the Africans are sold as slaves in Martinique, Guadeloupe and especially in Santo Domingo, prior to the slave brigs importing raw sugar, rum, indigo, spices, coffee, cocoa and tobacco. The Port of Nantes is at this time a huge entrepôt for colonial produce that is forwarded to other ports in Europe.

But the silting-up of the Estuary makes gaining access to Nantes more complicated for large vessels. Ports such as Le Croisic and especially Paimboeuf become its outposts. Cargo is loaded onto lighters that travel up the Estuary as far as Nantes.

The Port of Nantes. The construction site of La Fosse - Credit : Nicolas Ozanne, 1776. 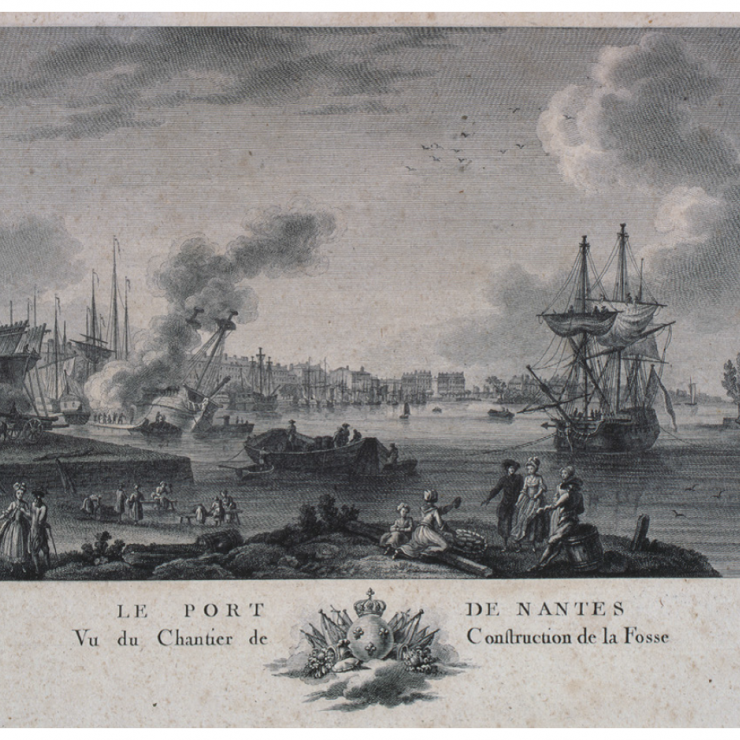 The early years of the French Revolution do not affect the Port’s growth. The overall gross tonnage increases from 237 716 tonnes in 1790 to 261 163 tonnes in 1792. The civil war, the decree abolishing slavery, the independence of Santo Domingo and the Continental System see the tonnage fall to 43 242 tonnes by 1807. In the 19th Century, while the slave trade is illegally resumed, notably to Reunion Island, shipowners like the Dobrée family turn towards whaling. Sugar imports still represent a very significant part of the Port’s business. Coal, required to operate the refineries, is imported through the Port of Nantes.

As of 1822, daily links are provided between Saint Nazaire, Paimboeuf and Nantes by steamers that will be bought up by the Orléans Railway Company, whose track arrives in Nantes in 1851 and is then extended as far as Saint Nazaire.The Saint Nazaire docks are inaugurated in 1856. 3 292 movements are recorded in the first year. The start of the line to the West Indies and Mexico, the Compagnie Générale Transatlantique Line chooses Saint Nazaire as the point of departure for its large liners in 1862. The building of the Penhoët Dock, in 1881, confirms Saint Nazaire’s role as the forward port facility on the Estuary.

With a draught of 5.80 metres, the La Martinière Canal is opened in 1892 and is intended to make the Port of Nantes more accessible in relation to the sea. At the start of the 20th Century, traffic at the Port of Nantes does indeed exceed the million-tonne mark. The overall traffic volume at the Basse-Loire facilities stands at 4 million tonnes. 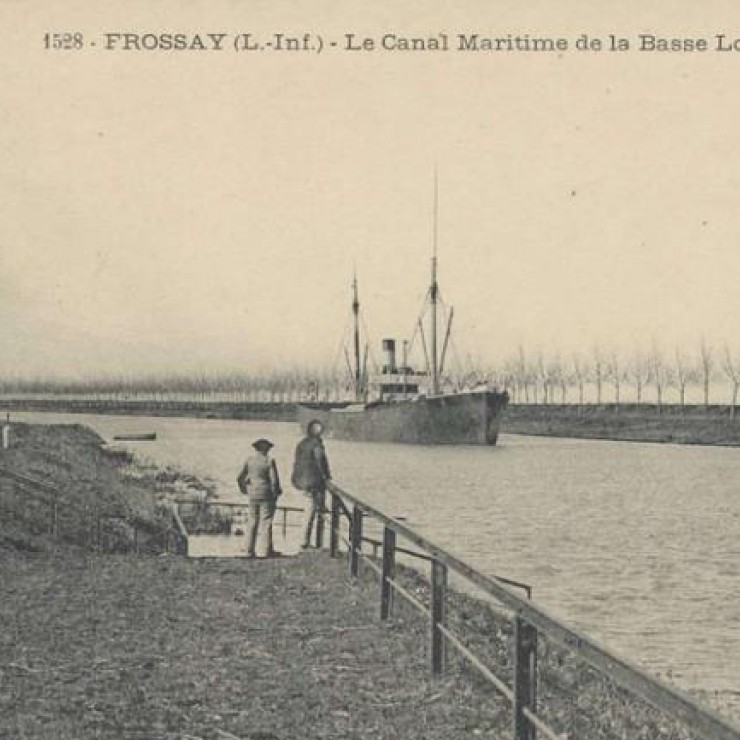 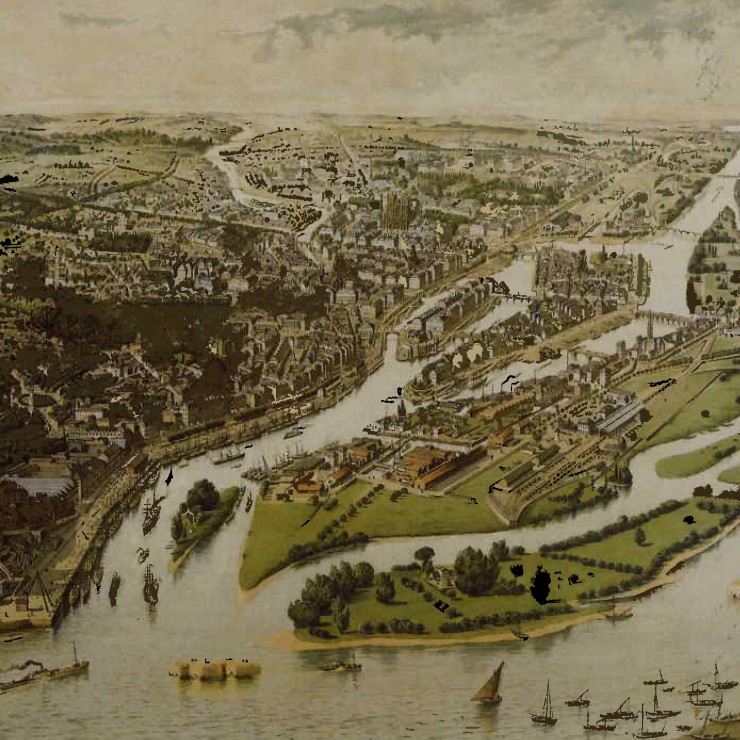 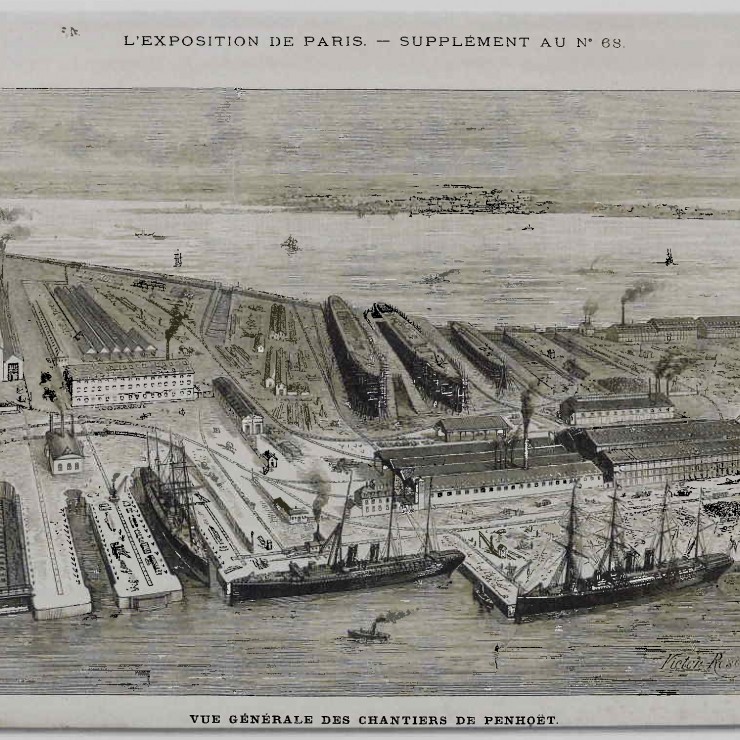 In order to permit vessels drawing up to 8 metres of water to gain access to Nantes, work is undertaken in 1903 to modify the riverbed. The positive results make the La Martinière Canal obsolete.

The Americans arrive in Saint Nazaire in 1917. They double the railtrack as far as Nantes and build oil tanker berths at Donges. The ANTAR Company will take advantage of these infrastructures in setting up a refinery on the site in 1931.

"There is reason to consider the Ports of Nantes and of Saint Nazaire as two closely related parts of a single maritime establishment…", acknowledges the Basse-Loire Study Group, created just after the First World War.

The air raids of the Second World War will cause considerable damage to the Basse-Loire port installations. 121 wrecks obstuct the accesses or form, at La Télindière, an imposing barrier.

The close relationship established between the Estuary’s upriver and downriver facilities results in the creation of the "Basse-Loire Maritime Establishment". New facilities are developed. The first installations at Cheviré come into being in 1956.

1966: The Ports of Nantes and Saint Nazaire are joined together

Donges: the ANRAR oil refinery in the 1960s - Credit : Ray-Delvert.

The Port of Saint Nazaire and the Chantiers de l'Atlantique shipyard in the 1960s - Credit : Heurtier. 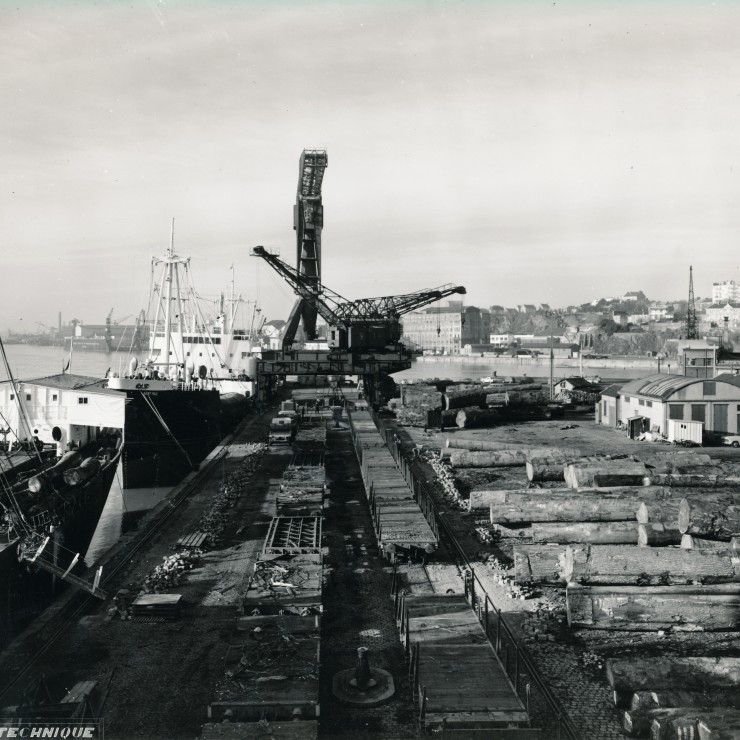 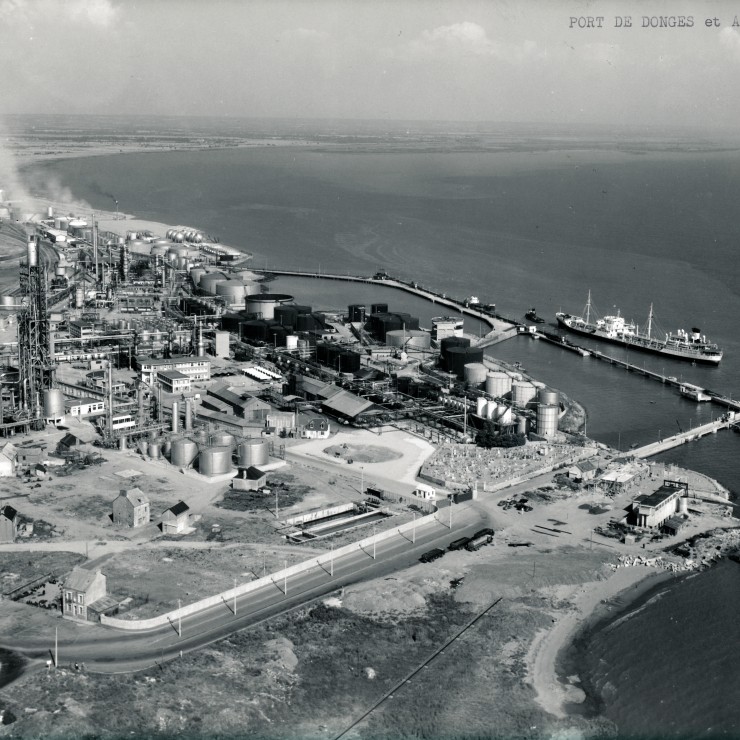 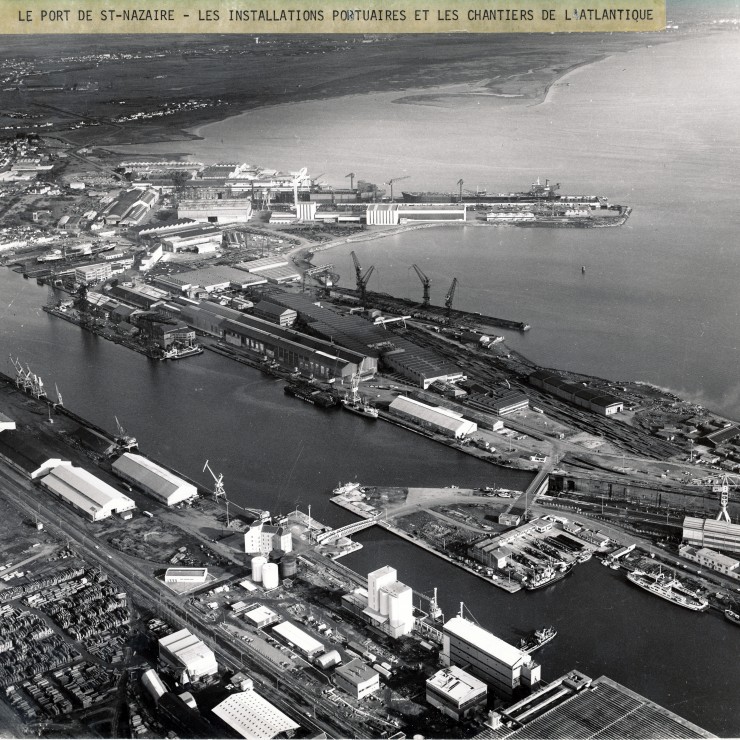 The decision to build a port facility between Saint Nazaire and Donges is taken in 1970. The development of the 4 berths of the agri-foodstuffs terminal at Montoir de Bretagne will continue from 1971 until 1990.

1976 is marked by the decision to locate a liquefied natural gas terminal at Montoir de Bretagne. With a capacity of 10 million tonnes, it is inaugurated in 1980.

Montoir de Bretagne: an overview of the port terminals in the 1970 - Credit : NSNP.

The construction of the liquefied natural gas terminal in 1971 - Credit : NSNP.

The Montoir de Bretagne multi-bulk terminal in the 1970 -Credit : NSNP. 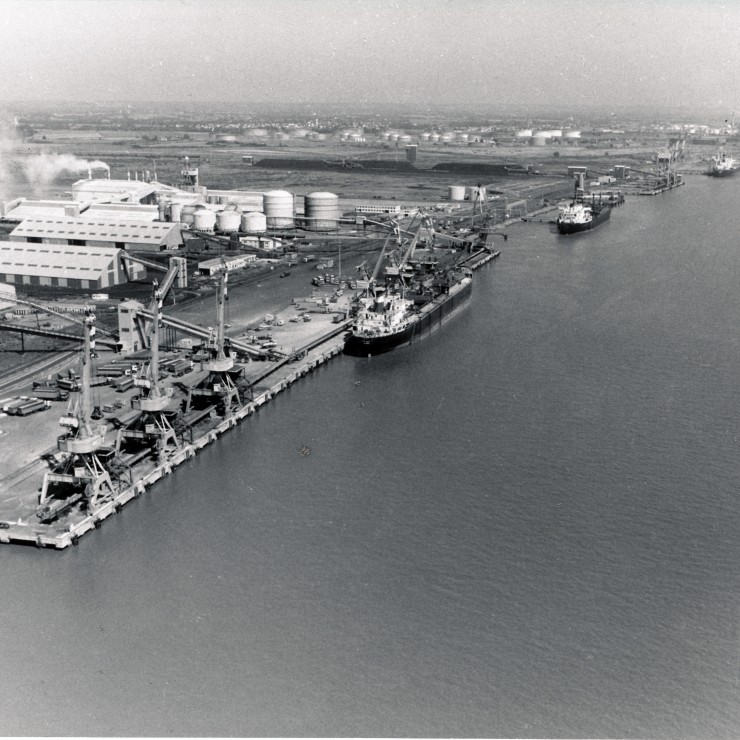 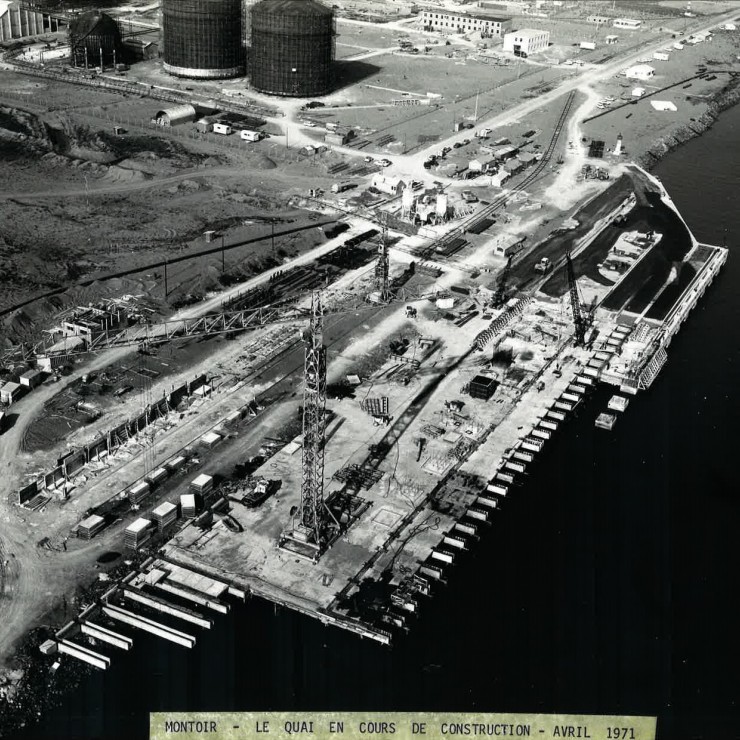 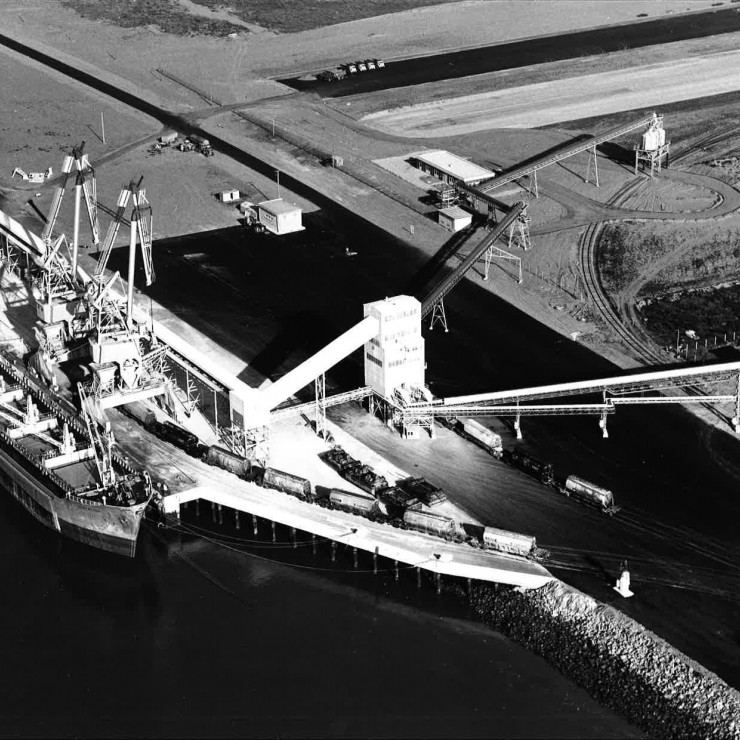 Since 2002, the Cheviré ro-ro berth has been used for the transportation of Airbus aircraft sections from Nantes to Saint Nazaire.

In 2005, the Port’s traffic volume reaches 34.5 million tonnes. A 4th berth is opened at Cheviré the same year in order to receive new traffic.

In the space of four decades, the handling capacity of the port plant and equipment has risen significantly, increasing from 75 to 1 250 tonnes of cargo an hour. 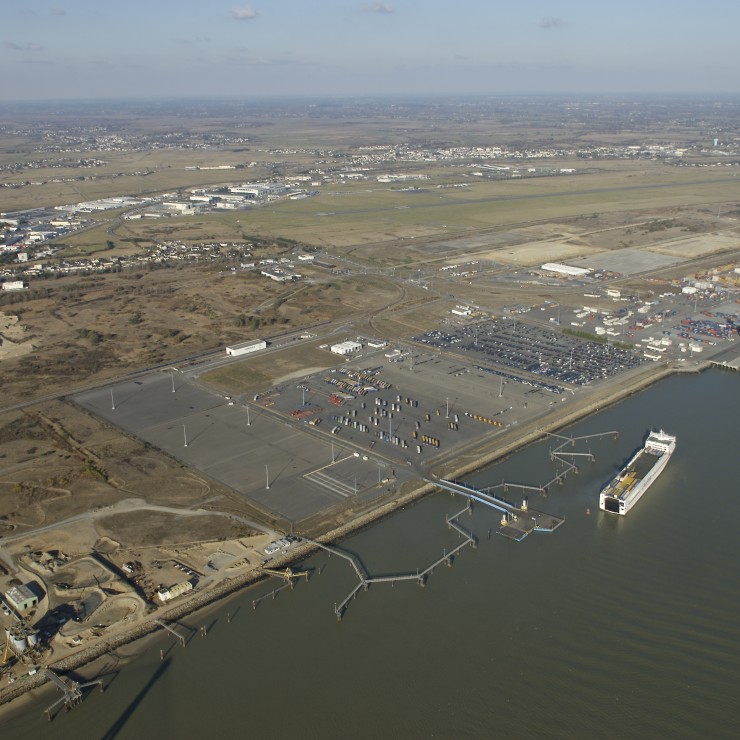 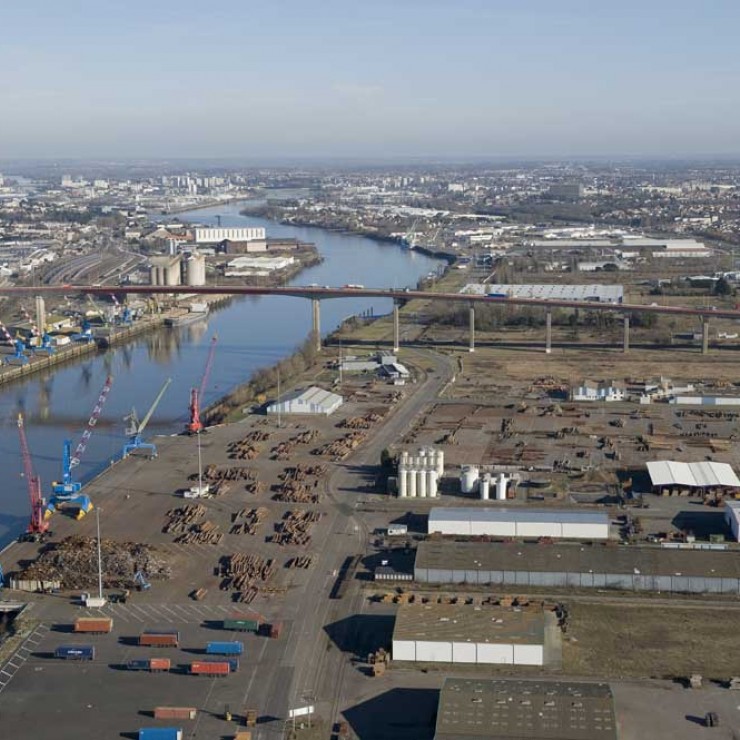 The new governance of the Nantes – Saint Nazaire Port Authority is installed in 2009. 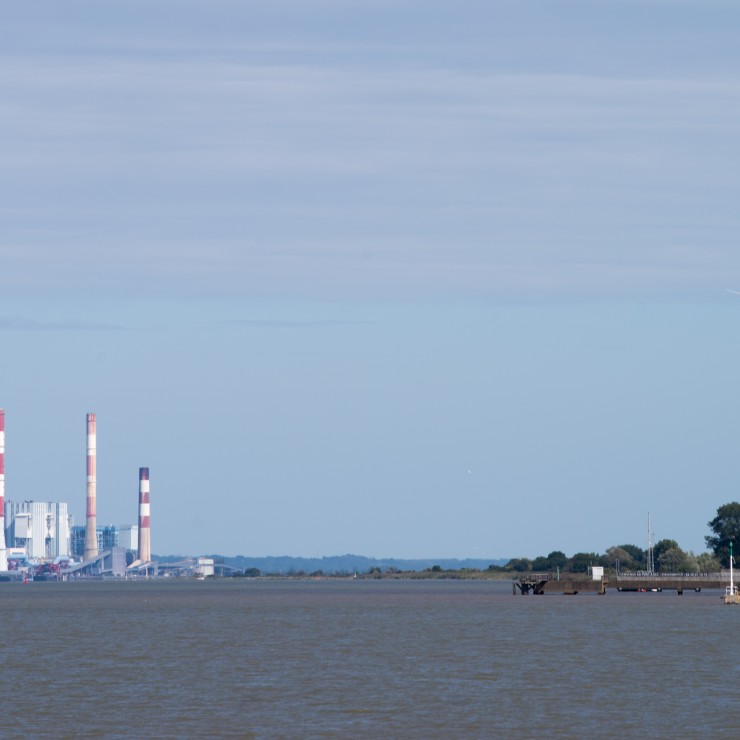 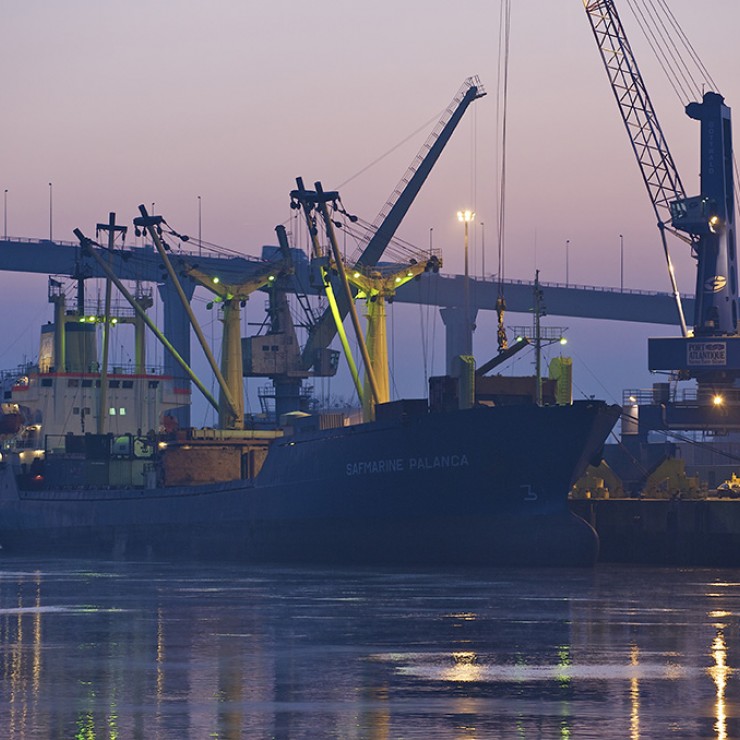 2015: Becoming the Reference Port for Energy and Ecological Transition

In 2015, Nantes ‒ Saint Nazaire Port sets itself the goal of becoming a reference port for energy and ecological transition. The stakes are high: two thirds of the port traffic on the Loire Estuary relate to fossil energy sources, and the terminals and industries are located on an estuary possessing rich, sensitive natural spaces. Nantes ‒ Saint Nazaire Port founds its initiative on the principle of transition, by undertaking a programme comprising 28 actions. The Port Authority notably supports the development of sectors of the future, such as the marine renewable energy sector, and accordingly makes a large number of improvements.

Loading of General Electric nacelles for an offshore wind farm in the USA - Credit: A.Bocquel. 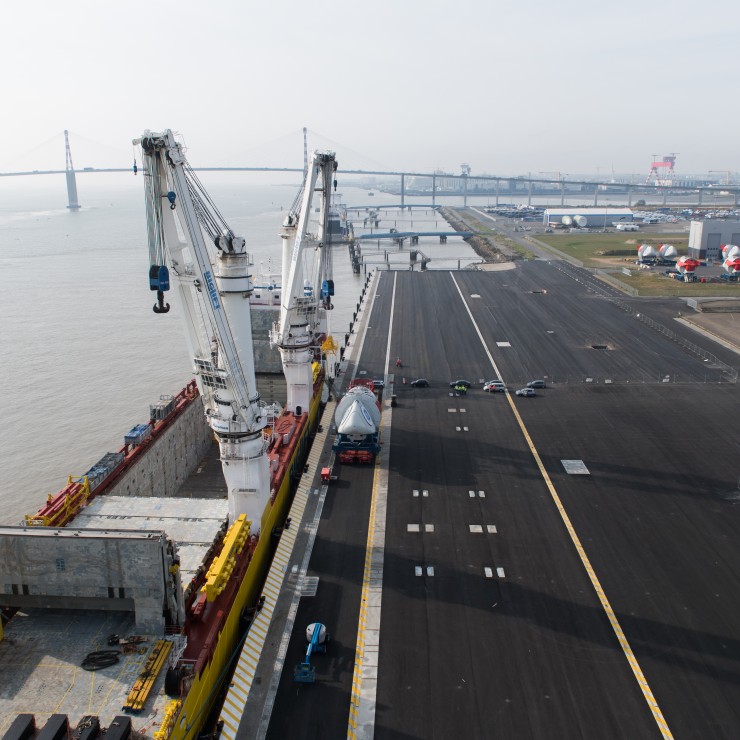 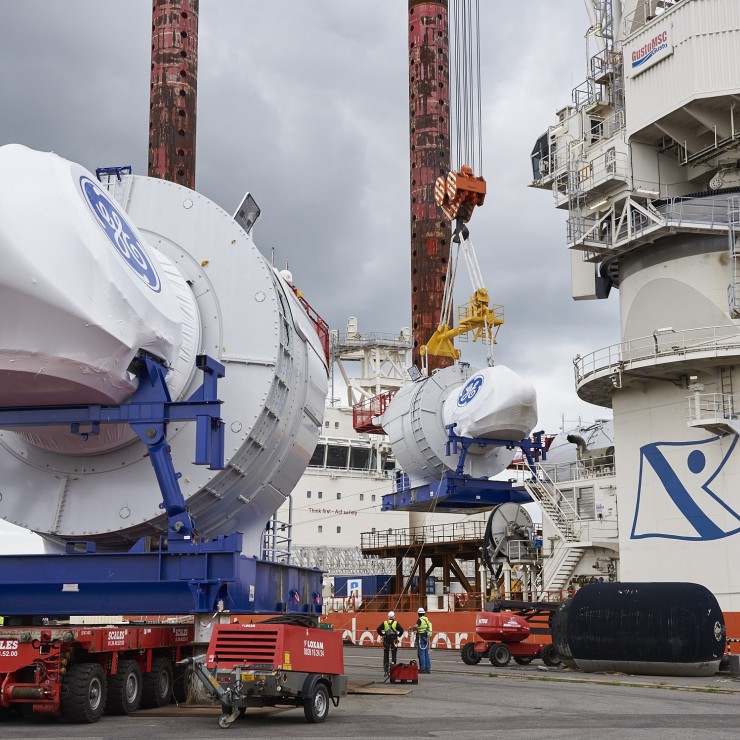 2019 is the start of a new era for the governance of the Nantes ‒ Saint Nazaire Port Authority. The scope of representation of Local and Regional Government is extended within Nantes ‒ Saint Nazaire Port’s governance bodies. Representatives of the Regions of Central France − Val de Loire and Brittany join the Development Board. For the first time ever, the Chair of a Regional Authority, Christelle Morançais, is elected at the head of the Supervisory Board.

Nantes ‒ Saint Nazaire Port prepares a new strategy in collaboration with the economic and territorial stakeholders involved. In this way, the Port Authority is adding to its ambition of becoming the reference port for energy and ecological transition, making that its lifeblood. It is progressively transforming its business model, which up to now had been dependent on fossil energy sources, by developing its real-estate assets via a participatory approach, and by supporting the development of innovative solutions and new sectors of activity such as hydrogen…

Established on account of the presence of tin ore in the Region, the Port of Nantes is one of the oldest port facilities in France. In this work republished in 2006, Nantes author Catherine Decours presents a broad overview of the history of the Port of Nantes. 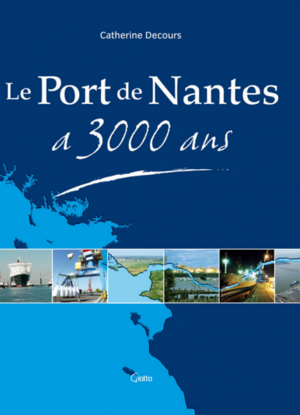 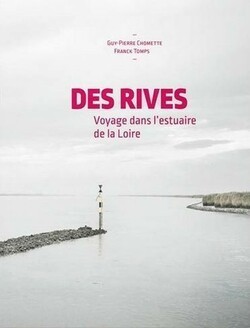 Riverbanks: a Journey on the Loire Estuary

Port activity zones, nature reserves, farmland, industrial sites, urban areas: the Loire Estuary forms a real-life patchwork. Guy-Pierre Chomette (texts) and Franck Tomps (photographs) walked the length of the Estuary in order to bring that patchwork together in a fascinating account of their journey.

"Riverbanks: a Journey on the Loire Estuary", by Guy-Pierre Chomette and Franck Tomps. Published by Editions 303, 2019.

Are you looking for archives related to port activity?